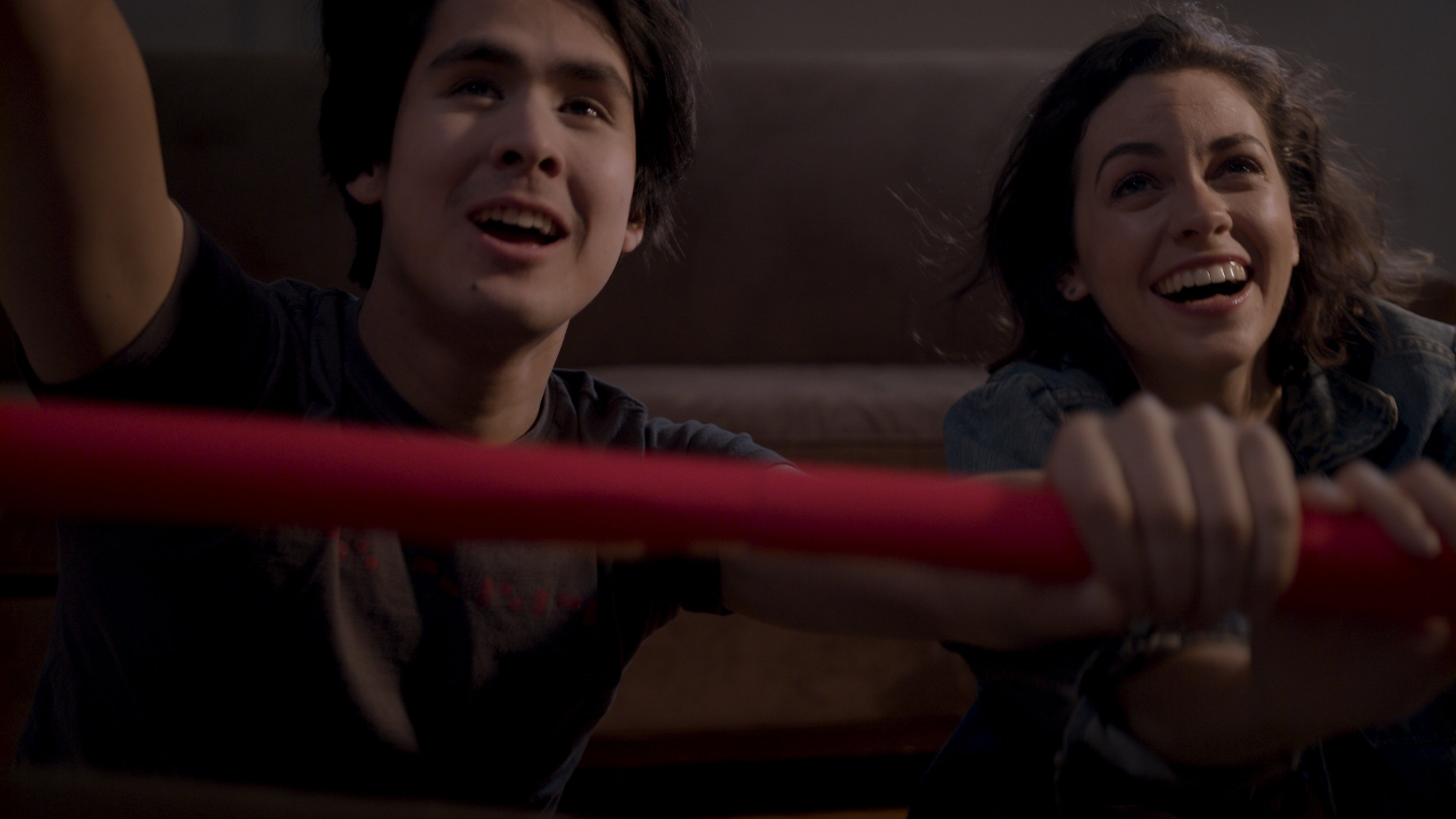 How to create a high-concept music video on a shoestring budget.

A music video can be a defining moment for a musician. Whether it’s Lady Gaga strutting in a papier-mâché crown or Kodaline’s “mini-indie film” masterpiece, a music video offers a visual way to tell the story of a song, its artist, and the ideas they embody.

When Chris Peters approached me to create a music video for his debut EP “Grown-Up Singer,” the challenge was creating content that reflected his magical realist lyrics while working within the financial and time constraints of an up-and-coming performer.

From the initial concept and production design to assembling a crew, here are a few things we learned about how to shoot a music video of high quality, on a limited budget.

What’s striking about his brand of storytelling is its intersection between childlike curiosity and a confrontation with adult responsibilities. Chris’s stage persona is a grown-up Max from “Where The Wild Thing Are.” He goes on made-up adventures. He carries around Strudel, a stuffed bear who is both misanthropic roommate and social media mascot — think Jiminy Cricket meets Bevers from Broad City. He goes on theme parks rides until they close.

But this silliness is a foil to the real-life events around him. It serves as a defense mechanism for otherwise daunting moments, from moving to a new place to saying goodbye to your significant other.

In listening to the debut EP, “Thunder Mountain” stood out as the song that most strongly united those concepts. Depicting a real-life night at the Magic Kingdom, the song represents not only the ups and downs in a relationship but the transition into adulthood people experience in their mid-twenties.

Tip No. 1 : Pick the song that best represents the artist, their brand, and what they are trying to say. It should also inspire a strong visual concept.

Chris and I both share an interest in magical realism, which became the visual framework for the video. Magical realism came into popularity through Latin American art. It takes what is otherwise a realistic depiction of daily life and injects elements of fantasy. This “magic” can often happen without explanation and can be borderline absurd.

We wanted “Thunder Mountain” to embrace childlike whimsy and imagination. But it still had to deal with serious, grounded issues in a relationship. The song plays with allegory, and there was a great opportunity to incorporate that imaginative thinking into how the characters function in the world through production design and narrative. While playful, it needed to feel real.

For “Thunder Mountain,” the fantasy world that Chris’ character creates for his girlfriend is grounded in reality — with an absurdist slant. Rather than go to an actual theme park, we had him to recreate memories of that experience by creating cardboard replicas. He creates things for her that exist tangibly in the world as props and part of the set, but require a suspension of disbelief. And there are few more unexplainable moments, like when their hair blows in the wind while on the cardboard ride — with no fan in sight.

Our budget (none) also justified the decision to rely on these elements of “realistic fantasy” to drive the story. Cardboard is cheap, recyclable, and easily repurposed. It also allowed us to incorporate a “homemade aesthetic” into the story. It had to look like Chris made all of these replicas in one afternoon.

For locations, we relied on an existing network of people willing to lend their spaces to us, including 51st Bakery & Cafe in Long Island City — where Chris formerly worked as a barista. Work with people’s schedules, be courteous and grateful, and you’ll be surprised how willing they will be to help you out.

And while we couldn’t fly out to Disneyland, Coney Island was only a quick drive away. It served as the real-life foil to Chris’ made-up world.

Tip No. 2 : Use what you have available, or what you can easily access, to help brainstorm. Realism can be your friend in low-budget scenarios, and can help you refine the story you are trying to tell.

‍
While we knew this project was going to have a lean team, we wanted to make sure we had the right people on board to make the music video successful. There is this tendency with low-budget projects to assume you can do everything yourself. While you can do that with some digital video work, the more complicated a shoot, the more you are going to have to divide your time and attention. Specialists can focus on one area at a time, and ensure quality.

In terms of essential crew, we determined we needed a Producer, Director of Photography, Production Designer, and a Production Assistant (or two). Thankfully, Cody Zumbro, our producer, lived with a couple of talented film & video people. We brought on Mitch Matacia as our DP and Federica Borlenghi and Hannah Squeglia as Production Assistants.

To play Chris’ girlfriend, we enlisted the help of Alex Becker, an actress and fellow former barista at 51st Bakery and Cafe.

Despite building a crew through an existing network, it was still important to have everyone understand and buy into the vision of the music video. We put together a detailed treatment, which outlined the vision and story, as well as more information about Chris as an artist.

Tip No. 3 : Get people excited about the concept. Give them a reason to want to work together. Don’t assume they will just be on board.

Production: How To Shoot A Music Video With No Budget
‍

‍
Once the storyline and the locations were confirmed, we needed to create a production schedule. From a coffee shop to Coney Island, our music video spanned over 8 scenes and two NYC boroughs. Across everyone’s schedules, we had to cram shooting across two weekends in February.

Cody worked on grouping scenes based on location, importance, props, and even costume changes. He had the added challenge of scheduling shooting in the dead of NYC winter, which means limited hours of daylight and often uncooperative weather.

This part was tedious but necessary. Because we could only shoot on weekends, and during times that didn’t interfere with everyone’s jobs, we needed to plan every hour with maximum efficiency. We also had to make sure that we were accurately accounting for travel time between locations, as well as breaks to take meals.

To make it easier, we used a planning tool called Shot Lister. The iPad app helped us to break down each scene by shot and time required for set up, shoot, and breakdown. The app then tallied up the total hours required. When we saw each day exceeded 12 hours, we knew we needed to cut down on the shots we wanted.

While Cody worked on scheduling, Mitch and I went through scene blocking, diagramming out where the camera and the actors would go, as well the equipment needed for each shot.

By the time the shoot arrives, at a bare minimum you need to have the following on lock:

From pre-production to editing, producing this music video took over 100 hours. Knowing how each of those hours was spent and planning for it helped us keep track of what we were spending too much time on and what we needed to prioritize. For video creators just starting out, reporting also helps you set up accurate benchmarks and scoping for future work, which clients always appreciate.

Tip No. 4 : Always have a plan and then a backup plan. Track your time and energy and use tools to make the process simple and convenient.

Have someone on your team whose job it is to stick to the plan you outlined. This is typically the producer (in our case) or the Assistant Director. As a director, you are going to want to take all the time you need to get the perfect shot, but time is not unlimited. Someone has to play the “bad guy” and track time.

On the day of shooting, Shot Lister helped us keep track of the schedule in real time, and make adjustments when we were going over.

No two shoots are ever the same, and every video should be a learning experience for everyone involved. Keep note of challenges and obstacles on set and remember to follow up about them at the end of the day. On our first day of shooting “Thunder Mountain,” we ran into some lighting issues, which threw us off track. Checking in with our DP, we realized that we were drifting away from our original vision of realism and lighting the music video as naturally as possible.

We ended up stripping our lighting gear down to the essentials for the following shoot day and ended up wrapping two hours earlier than we planned.

Tip No. 5 : Keep checking with your crew throughout the day. At the end of each shoot, check with your team and ask for candid feedback on what is working and what is not.

It’s possible to create entire worlds and complete narratives with just sturdy paper products, a little bit of tape, and an incredible team. And when it comes to learning how to shoot a music video with no budget and build a brand for an emerging artist, big ideas are never truly off the table. You just need to think outside (or in this case, inside) of the (cardboard) box.

Want to work on creative projects together?

If you like what you see and want to work together, get in touch!